You are here: Home / Sex & Relationships / I Couldn’t Control Myself: Outer Planets and Cheating 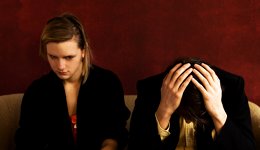 “It just happened” is always a lame excuse for cheating. What if you could blame your affair on the astrological transit you were having when you cheated? Would that make your lover take you back? Maybe not, but a look at the planetary heavyweights Uranus, Neptune and Pluto can illustrate the motivation for cheating, as well as the anticipated outcome.

One of the key words for Uranus is freedom. The Uranian affair results from a quest for independence from the relationship. For some people, cheating is the quickest path to an instant breakup. It provides an easy way out for those who avoid confrontation or are simply too heartless to break up in a mature fashion. The Uranian affair is also sought to spice up one’s sex life. If action between the sheets at home has become dull, an emotionally distant, electric-charged fling can — in some cases — help one stay in a relationship. Uranus also governs open relationships, but according to the guidelines of the polyamorous lifestyle, sleeping with someone else is not necessarily considered cheating. Uranus-style affairs often happen without warning, and the sex itself is totally unpredictable. The excitement of getting caught is part of the lure.

Our longing for emotional and spiritual connection is symbolized by Neptune. Neptunian affairs are often the most hurtful, because they involve more than just sex. When Neptune strikes, the urge to escape humdrum reality can feel overwhelming, and the desire to merge with another can be all-consuming. Neptunian cheaters are emotionally unfaithful, and may even have given their heart without having consummated the relationship — think internet romance. These types of affairs can be extremely difficult to recover from, as rebuilding emotional bonds takes time and trust. Getting caught can often bring the adulterer relief, liberating their heart to go where it truly wants to be.

The Pluto experience can push the boundaries of what a committed couple may find acceptable. If one’s partner won’t satisfy certain taboos or fetishes, one may – under Pluto’s influence — cheat in order to get his or her sexual needs met. In the film Eyes Wide Shut — starring Tom Cruise and Nicole Kidman — Tom’s character had to journey solo to find out how far he could go into the sexual underworld, hoping he could then return to his former life. The path of Pluto is secretive, and in some cases the other partner may be totally unaware that an affair has taken place.

About the Author
Cassandra Tyndall is an avid professional astrologer based in Sydney, who offers readings to clients locally, interstate and all over the globe. Known for her passion, skill and honesty, Cassandra combines traditional and modern techniques to enhance specific predictions for individuals, couples and businesses. She has been a regular contributor to the annual WellBeing Astrology Guide, and is the resident astrologer for Australia’s Women’s Health & Fitness magazine.

Comment below: Did any of your past affairs coincide with an outer planet transit?

Image on home page by CarbonNYC under CC license.