You are here: Home / Sex & Relationships / The Astrology of Breaking Up, Using Secondary Progressions 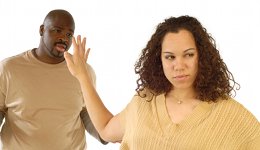 The popular book He’s Just Not That Into You freed up the headspace of many women who were trying to make sense of their breakups. What a welcome relief it was when Miranda from Sex and the City blurted out those liberating words! Astrology sheds a similar light when the expiration date of a relationship looms. Through exploring the symbology of the horoscope, you can ascertain an astrological reason for why you or they moved on, thus helping to erase feelings such as guilt, remorse or the deep-seated thought that maybe you made a mistake in entering or exiting the relationship.

There are a multitude of astrological line-ups that result in a breakup. One textbook example is the Progressed Lunar Return. This occurs at age 27 and again about age 54, when the Moon by Secondary Progression returns to the same position it was at birth. The Progressed Lunar Return symbolizes the end of an emotional cycle and the beginning of a new one. During this phase, you may not be able to ignore that “knowing” feeling that it’s time to move on. Often, shortly after a Progressed Lunar Return breakup, a new relationship begins and those bonds are often cemented around the Saturn Return at age 29.

The second influential planetary force that sets the tone for a breakup is the Progressed Sun changing signs. In Secondary Progressions, a day is equivalent to a year, such that the first year of one’s life is symbolized by the positions of the planets one day after one’s birth. Thus, it takes thirty years for the Sun to progress through a complete sign, because each zodiac sign contains 30 degrees, and the Progressed Sun moves a degree a year. Although the Progressed Sun’s ingress into a new sign occurs at different times for each individual, it is certainly a phase you don’t emerge from unscathed! This unfoldment feels like you are ready to delve into the next dimension of your identity and explore new ways of creative self-expression. Often relationships don’t survive this kind of terrain without riding on an exceptionally rocky path. Some couples navigate their way through the bumps, others just crash and burn. Many people require time and space to integrate this fundamental shift in the core of one’s identity. Often the jilted partner feels threatened by the changes within your internal landscape or no longer feels useful, needed or even wanted by you. It takes a very solid union to go the distance during this phase.

Working out the position of your Progressed Sun is easy. For example, if your birthday is December 29, your Sun is positioned approximately at 7 degrees of Capricorn. Taking the “day for a year” theory, by the time your reach your 23rd birthday, the Progressed Sun will have moved into the sign of Aquarius (keeping in mind that each zodiac sign is 30 degrees). Your usual goal-oriented, reliable and responsible self gives way to a new mode of self expression where independence and the need for excitement prevail. When the internal compass shifts in this way, it can often manifest as a breakup, unless of course your partner is in an emotionally mature place such that he or she can stand beside you and support you through your process of change.

About the Author
Cassandra Tyndall is an avid professional astrologer based in Sydney, who offers readings to clients locally, interstate and all over the globe. Known for her passion, skill and honesty, Cassandra combines traditional and modern techniques to enhance specific predictions for individuals, couples and businesses. She has been a regular contributor to the annual WellBeing Astrology Guide, and is the resident astrologer for Australia’s Women’s Health & Fitness magazine.

Comment below: Have you undergone a Sun sign change by Progression? If so, comment below about your experience and the effect it had on your relationship.