You are here: Home / Sex & Relationships / Capturing and taming the wild Sagittarius male: A guide to his Venus sign 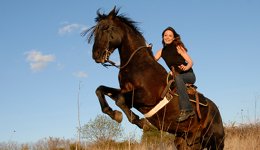 Horses have been usefully domesticated for thousands of years. This didn’t happen until our ancestors figured out that you can’t outrun a wild horse … but if you put your mind to it you can out-think one. If you find yourself in a relationship with a Sagittarius man, applying the same logic can help you get what you want out of the situation.

Sagittarius men aren’t an inherently worse bet than anyone else for a committed long-term relationship. However, their boundless, bouncy enthusiasm at the beginning of a relationship can be mistaken for a permanent feature. They wax enthusiastically about you until the relationship lives out its natural life span, and then something (or someone) becomes the shiny new distraction.

Understanding the love style of your Sagittarius man can give you the upper hand in a relationship. Odds are good that he’s so busy with his enthusiasm for you (and life in general) that even he isn’t aware of how he’s wired for love. Find his Venus, learn its language, and this could be the one you ride all the way home.

Sagittarius Man with Venus in Libra

This is a highly magnetic combination that really grabs your attention from the other side of the bar. They tend to be more charming and presentable than the average Sagittarius. Generally, they perform well within the context of a developed romantic relationship. The biggest problem with this combination is that you aren’t the only one noticing these qualities in them, and they can often be led astray by their sense of adventure with just a little romantic coercion … just like Woody Allen (who nonetheless remains faithful to his current wife, despite the unusual nature of their relationship). The best way to hang on to one of these is to play into a shared sense of adventure, like with Anna Nicole Smith. Just be careful not to play along too far … like with Anna Nicole Smith.

To read the rest of this article you must purchase a Lifetime All-Access Membership, which allows you to view the entirety of Sasstrology’s archives for a one-time fee of $12.

All horoscopes and forecasts will always be free to the public. New articles are only viewable to the public for 30 days after publication.

When the sporting nature of Sag is combined with the intensity of Scorpio, the end result is a man who wants to play, and play hard. Doors front man Jim Morrison is a good example of this: when he dedicated himself to his sex life, no one was more focused — whether within the context of a relationship or not. These Sagittarians are also better at keeping a secret than the average, and take more pleasure in it. A good example is magician Criss Angel, who combines the openness of his Sun Sign with the smouldering Scorpio air of mystery. Play along, and you could disappear with him, as opposed to him disappearing on you.

Bouncy and fun, open and idealistic, these are often the Sagittarians who can be the most work to pin down in a relationship. They love the ideal of a committed, long-term relationship, but often overestimate their ability to play along. They’re rarely manipulative, but you might end up feeling handled after the thrill of the hunt is over. Share in that sense of adventure. Find their game and play along, just like tattoo artist Kat Von D does with her Sag/Sag man, Nikki Sixx. Try to be the voice of reason on occasion, too. Remember: Sag/Sag Jimi Hendrix overdosed on his girlfriend’s pills … not his own.

Sagittarius Man with Venus in Capricorn

Venus in Capricorn has a well-grounded reputation, and nicely balances out the “stray factor” inherent in Sagittarius. Consider the case of Brad Pitt, successfully married to his female equivalent Angelina Jolie. Their fame and unearthly good looks might make them a hazard to stray, but they stay grounded by their mutual love of collecting small children. Even Britney Spears, for all her craziness, remains strongly focused on her kids, on business, and on her sense of family. Find the stability behind the sportiness and this could be a keeper.

Sagittarius Man with Venus in Aquarius

The independent and non-traditional flavor of Venus in Aquarius can be a difficult combination to grasp. Treat this one fairly and open-mindedly, without too much jealousy, and it can work. Amy Lee of Evanescence, who manages to quietly maintain a marriage to a non-celebrity without any sign of difficulty, is a good example of this. On the other hand, you could be dealing with someone so non-standard that neither you nor anyone else will break the code. A good example of this is Andy Dick, whose name rarely appears in any sentence with the words “good example” in it.

Remember: although everyone says “no head games” in their personal ads, every relationship is a game, of sorts. There are rules (spoken and unspoken), goals, and strategies. A Sagittarius man is naturally fond of sports, games, and competitions. And all it takes to win any game is an understanding of the rules and of your opponent. Have fun with it, and he’s likely to have fun with it, too. And that, more than anything else, is what makes a Sagittarius man come back for more.[/show_to]

All celebrity images are in the public domain and found in the Wikimedia Commons.

Matthew Currie is an astrologer with over 20 years of experience, and is the author of "Conquer The Universe With Astrology." Along with Hilary Young, he is the host of "Love And Sex In The Stars" (a show about the intersection of astrology and human hearts) on Blogtalkradio.com. In his spare time, Matthew shouts at the neighbors a lot.