Listen to this article 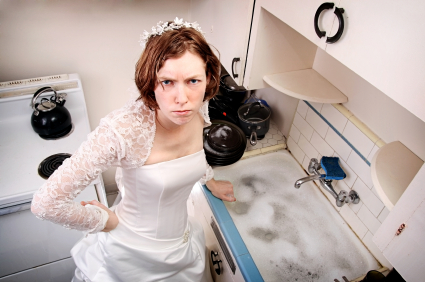 Studies show that how much housework a man shares with his significant other results in a bonus for him — more sex! If the woman feels the man is putting in his share, she is much more likely to feel warm and cozy towards him. But we are getting into tricky things here when we are talking about a woman’s feelings, so just pitching in doing the dishes half the time might not just do the trick. Men sometimes overlook the fact women view the state of the house as a reflection of themselves, just as a man views his job as a reflection of himself.

Parsing a woman’s psychology is complex, but we can get a clue as to what she deems important in housework by looking at her natal Venus position. Venus shows what it is that she values.

Venus in Aries — She doesn’t want to spend much time doing housework, and she actually leaves a few things unfinished. She may be in such a rush to finish the job, she’ll start several things at once and then get off track with another project. Here your objective is to be ready to move when she is in motion, and offer to help with finishing jobs you are comfortable with. Offer to wash the pots and pans after she does the plates and glasses; swiffer the floor after she sweeps it. Working as part of a team turns her on, so use this to your advantage.

Venus in Taurus — Like any of the earth signs, she wants a perfectly clean and tidy house, but she doesn’t exactly want to do it herself. You’ll come out ahead if you offer to have a cleaning service come in once a week — out of your mad money, of course. It serves no purpose to have it come out of the household expenses, which she deems her money. Otherwise, you have to ask her for a list of things that you should be responsible for, and do them faithfully each and every time. You’ll be glad you did.

Venus in Gemini — Like her Aries sister, Venus in the sign of twins rushes around far too much to finish anything to her satisfaction, yet she really talks a good game about what she does. Give her praise and reassurance that, yes, dust bunnies under the couch are perfectly acceptable. If you like your shirts cleaned and pressed, them maybe you should take your clothes to the dry cleaner instead. If you like your food to be fresh and not processed, then take on the cooking duties. If you fend for yourself, she will be much more likely not to feel overwhelmed.

Venus in Cancer — If you want to avoid hearing her whine about how she does everything, then it is wise if early in the relationship you divvy things up proportionally. She won’t expect you to do the cooking, of course, but she doesn’t want to wash the dishes, so get cozy with the dishwasher. She’ll keep the bathroom spotless, so you don’t have to do much in that department, but if you share the childcare duties she’ll be thrilled. Whatever you do, don’t call watching the kids “babysitting.” This drives her up the wall, since after all, these are your children too.

Venus in Leo — Be smart — hire some help. OK … hire lots of help. She’s much too busy running committees and making friends with your colleagues’ wives to pay much attention to the house. Whatever you do, hire good help. And she’ll hate me for say this, but get used to eating in restaurants. When she does cook, make a big fuss over it.

Venus in Virgo — You’ll never do things as well as she does, so you might as well get used to that right now. A Venus in Virgo woman has a highly honed sense of perfection, and even she falls short of that. This is another woman who really hates the socks and underwear on the floor. You do know where the dirty clothes go, don’t you? Make sure you do. Take your lumps and your “honey do” lists with stride. She’ll do the bulk of work, trust me, but it makes her feel better when you do something rather than lay on the couch watching television.

[ad#banner]Venus in Libra — The women under the auspices of the Goddess of Love want her home to reflect romance. This means you do not leave a mess of papers on the dresser and your socks and underwear on the floor. She likes to tell you how things should be done, but if you come up with a perfectly good way to perform a task, she won’t give you grief about it. Be prepared to pick up things from the store on the way home nearly every night, since she often forgets that she lacks a critical ingredient for dinner. If you have any Virgo at all, help her out by organizing the cupboards without being asked, and don’t make a big deal out of it if you do. Tell her how much you appreciate her and she’ll show you are appreciated too.

Venus in Scorpio — This is the spring cleaning, summer cleaning, fall cleaning and winter cleaning lady. She digs in deep — when she gets around to it — and often there are strong chemicals involved. Because she often doesn’t know when the cleaning bug will take her, she doesn’t articulate well what it is she wants you to do or when she wants you to do it. Here it is best to make sure the kids pick up their toys in the living room and that you make sure the trash from all the rooms is taken out. It doesn’t hurt to make up the bed each morning. When she asks why, you can always tell her its so you both can twist the sheets later. She’ll gladly take the hint.

Venus in Sagittarius — The Venus in Sagittarius woman likes to do things on a grand scale, and that’s why so many of them put off the regular household tasks. Laundry and dishes pile up, the dog isn’t groomed in weeks, and the children’s haircuts are put off until you can’t see their eyes anymore. It’s not that she doesn’t notice these things need to be done, but she’d rather have some fun than perform another tedious task. To keep things manageable, take stock of the things that don’t but should get done on a regular basis, and divvy them up between yourself and the children. She’ll be so relieved that she’ll make sure she has some fun with you.

Venus in Capricorn — When the planet of love is ruled by the taskmaster planet Saturn, things are done and they are done on schedule, thank you very much. Often you feel like your efforts in the house are not needed, because things are done regardless. However, Venus in Capricorn likes it when their loved ones are useful. She likes it if you take over one or two tasks and make sure they are done each time, or when you plan out a household task and asks her opinion about it. Even if she does the bulk of the work, if she knows she can count on you to complete something critical — like picking up the kids at school or taking them to soccer practice — she’ll have good feelings towards you. And you do want that, don’t you?

Venus in Aquarius — The only woman in the zodiac who likes it if you buy her one of those cyclonic vacuum cleaners, she needs lots of gadgets and cleaning supplies to get the job done. It helps if you push around the vacuum and keep the garbage disposal running, because unfortunately she doesn’t quite understand that there are some things that shouldn’t go there. Talk with her about what it is she wants you to do, and nail down from the get-go which things are most important. Engaging her verbally engages her mentally, and you want her to think about what it is that will make you happy.

Venus in Pisces — She wants the house to be beautiful, but she doesn’t necessarily have the organizational skills to keep the household running on track. Here is another situation in which you might have to fend for yourself if you want clean shirts and underwear. Not that’s she’s hopeless. She’s a whiz in the kitchen and she likes a spotless bathroom. Keep the living room picked up, learn to load a dishwasher and help the kids with their homework. The rest will just have to take care of itself, if you want her to have the time to pay attention to you.

Beth Turnage is a professional astrologer with over twenty years experience counseling clients in career and relationship issues. She writes an astrology column for a weekly newspaper along the Connecticut shoreline and blogs about astrology at Astrology Media Press.

In the natal astrological chart, Venus and Mars are the “go to” planets of love and relationship.